Thank you for contacting us! If needed, you will hear back within 24 hours. 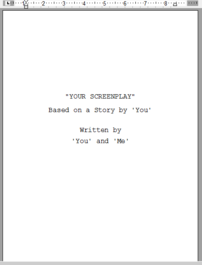 Save THOUSANDS hiring a WGA-eligible writer for a fraction of WGA rates!

Please find below my Screenwriter Rates for my top scriptwriting services, including my prices to write a screenplay, write a TV script, rewrite a screenplay, and polish a script.  Just scroll down to see my full Rate Card of film and TV writing services, including the rates for writing a treatment, preparing a TV series bible, or if there's anything else you need that's not listed here, or if your project has a specific budget; feel free to send me an email for a customized quote.

And if you find a screenwriter or script doctor with comparable experience and a lower price, please let me know and I will match their price!  (I've googled around and I couldn't find anybody else with my credentials even offering these services, let alone for these competitive rates.)

All prices are in USD and my fees are payable in installments, at each stage of completion.  I accept online payments via Paypal.com, including credit cards (no Paypal account required).  When you order a service, I will email a "works made for hire" agreement for your approval, confirming that you retain all the rights to the idea / story / concept / characters and you will own all the rights to the Script.  Looking forward to working with you!

If you're a member of a professional guild - eg: DGA, PGA, WGA, SAG-AFTRA - or if you have credits in the entertainment industry (film / TV / video game / comic / publishing / music), please send relevant links to receive an Industry Discount on all prices for my screenwriting services.

Whether you need a Screenwriter to write a feature film screenplay or a TV writer for your television script, I will work one-on-one with you to help develop your ideas, story or concept into a well-structured Script Outline, mapping out the entire plot and all of the characters.  Once the Script Outline is complete and approved by you, I will then use this outline as the blueprint / roadmap to write the script as your Co-Writer / Ghost Writer - with pages sent for your review, creative input and approval throughout the process - crafting a professional script that's delivered at an industry-ready level, on par with the quality of a polished third-draft.

Who receives a credit on a film screenplay / TV script?  Typically, the Screenwriter is credited as a 'Co-Writer' on the cover / title page of the Script.  Eg; "Based on a Story by 'You', Written by 'You' and 'Me'".

However, if you are seeking a completely anonymous, uncredited Screenplay Writer / Ghost Writer, please note the prices for a Ghostwriter Screenwriter will be double the listed rates.

Do you write Short Scripts, too?  Yes, I do!  If you have an idea for a short film, or a script that's partially drafted; I can turn it into a short script that's ready for production!  Contact me for pricing for hiring a short film writer.

Do you already have a script draft that needs a rewrite?  As a Script Doctor and Consultant, I can rewrite your film screenplay or TV script, by identifying potential changes and recommending improvements, as well as implementing any of your own ideas and updates.

The changes in a rewrite tend to involve 'broader brushstrokes' such as shifting, rewriting and adding new scenes to improve the narrative; reworking and restructuring the entire script to deliver a flowing, cohesive, and satisfying series of Acts; strengthening the development of characters and their arcs, and even adding new characters; punching up comedy scenes to make audiences laugh out loud, ramping up edge-of-your-seat scares for a thriller, and getting pulses soaring with exciting action sequences; and, ultimately, rewriting and adding dialogue and descriptions throughout the script to tell a compelling first-rate story.

I am also a pro at interpreting script coverage or producer's notes that you might have been given, to deliver a new draft that is ready for a green light!

I will work one-on-one with you to develop a game plan for any changes and fixes.  Once the plan is approved by you, I will rewrite the script as your Co-Writer / GhostWriter / Script Consultant - with pages sent for your review, creative input, and approval throughout the process - to complete an industry-ready script that's rewritten and polished to impress everyone; from script readers and gate-keepers, to film & TV executives and decision-makers.

Who receives a credit on a film screenplay / TV script?  For rewrites, the Script Doctor / Screenwriter is typically credited as a 'Co-Writer' on the title page of the Script.  Eg; "Based on a Story by 'You', Written by 'You' and 'Me'".

However, if you are seeking a completely anonymous, uncredited Script Doctor / Ghostwriter, please note the price will be double the listed rates.

Do you have a script draft that needs a polish?  While a rewrite can address changes that affect the 'big picture', a polish can focus on the individual aspects of your character and story that make all the difference for a professional industry-ready script.  Whether it means tweaking lines of dialogue here or there, refining scenes that aren't firing on all cylinders; elevating a character who has fallen to the wayside; I can polish your film screenplay or TV script to wow producers, agents, and investors!

I will work one-on-one with you to discuss the expectations and goals for the polish.  Once we're on the same page about what's needed, I will then professionally polish the current script.

My script polishes are completed as a Script Consultant / uncredited Script Editor.

Do you have a script draft that's almost ready and it needs a final edit?  I can proof and edit your current film screenplay or TV script to give it that professional shine, so it's ready to share with the world.

I will also provide a page of feedback notes with my comments / suggestions highlighting areas for any future revisions to help improve the script and make it the best it can be.

My script edits are completed as a Script Consultant / uncredited Script Editor.

Email me now to get started on your Script!

To see more of my Screenwriting Services and Rates, check out my handy Rate Card below - which includes a side-by-side comparison with how much it would cost to hire a screenwriter if paying the WGA's rate for a pro screenwriter - THOUSANDS of dollars more than my own prices.

That's right - You're hiring a first-class script writing service from an award-winning, professional, produced screenwriter, with over 20 years in the film and TV industry - yet, my Screenwriter Dude prices are uber-competitive at a fraction of the WGA's minimum prices.

So, no matter where you are - my clients are from all over the U.S. and around the world! - you can hire who Hollywood hires, for a great price!